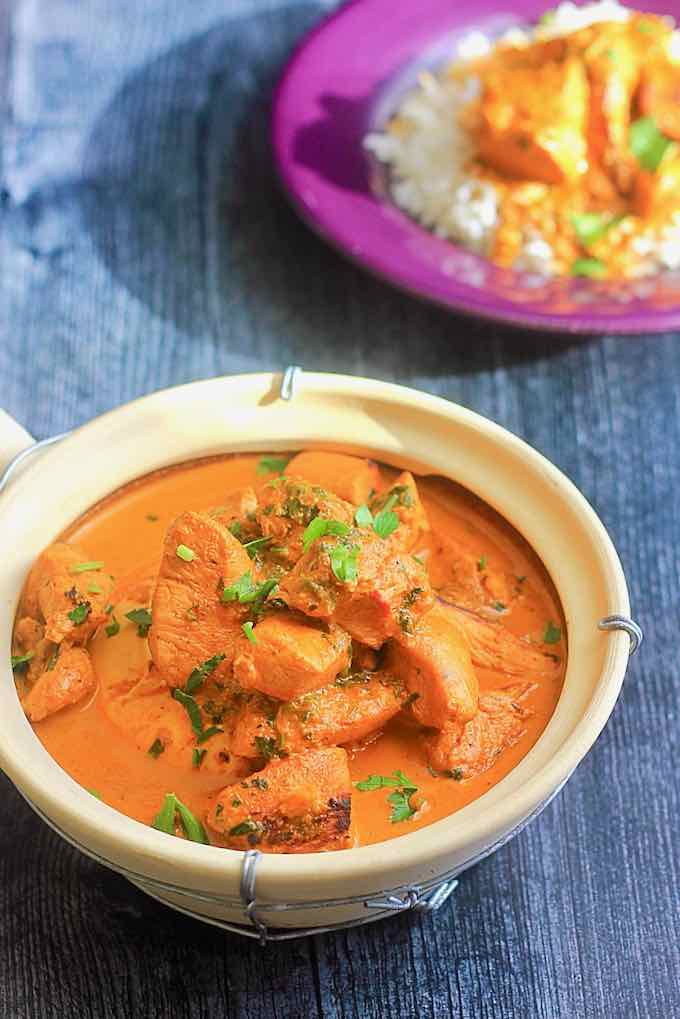 Butter chicken, also known as murgh makhani, is one of the most popular Indian curries around the world today. It’s quite a mild curry compared to many Indian curries. Butter chicken is composed of pieces of chicken cooked in a mildly spiced tomato and cream sauce.

What is the origin of butter chicken?

Originating from northern India, butter chicken was first made in 1947 thanks to the creativity of three Indians, Kundan Lal Gujral, Thakur Dass, and Kundan Lal Jaggi. These Punjabi Hindu restaurateurs were the founders of the famous Moti Mahal restaurant in Delhi in 1948.

They needed a way to use up another popular creation, tandoori chicken. The dish was made “by chance” while trying to prevent the already-cooked meat from drying out, the meat was slowly stewed in a gravy of tomatoes, aromatic spices and butter, creating this delicate chicken in a gravy that was rich in butter and cream.

In 1974, a recipe was published for murgh makhani (tandoori chicken cooked in butter and tomato sauce). In 1975, the English phrase “butter chicken” first appeared in print, as a specialty of the house at Gaylord Indian restaurant in Manhattan.

In India, murgh makhani is usually made with bone-in chicken and outside of India, boneless chicken is more commonly used. As with any dish, bone-in chicken will always give the most flavor.

Traditionally, the marinated chicken is cooked in a tandoor prior to being added to the sauce. Tandoor ovens are used throughout Southern, Central, and Western Asia and are cylindrical clay pots used for cooking and baking.

The heat is generated by a wood or charcoal fire at the bottom of the tandoor and the air inside the tandoor can reach upwards of 900 F (480˚C). Tandoors are often left lit for hours at a time while a consistent temperature is maintained.

Westernized versions will instead grill or roast the chicken in an attempt to replicate the flavor generated by the tandoor. In the absence of tandoor oven, grilling the chicken on a barbecue can definitely generate more flavor than roasting it in the oven.

Alternatively, the marinated chicken (shaking off the excess marinade before adding it) can be pan-fried, until it’s browned or the chicken can cook along with the other ingredients in the pan. 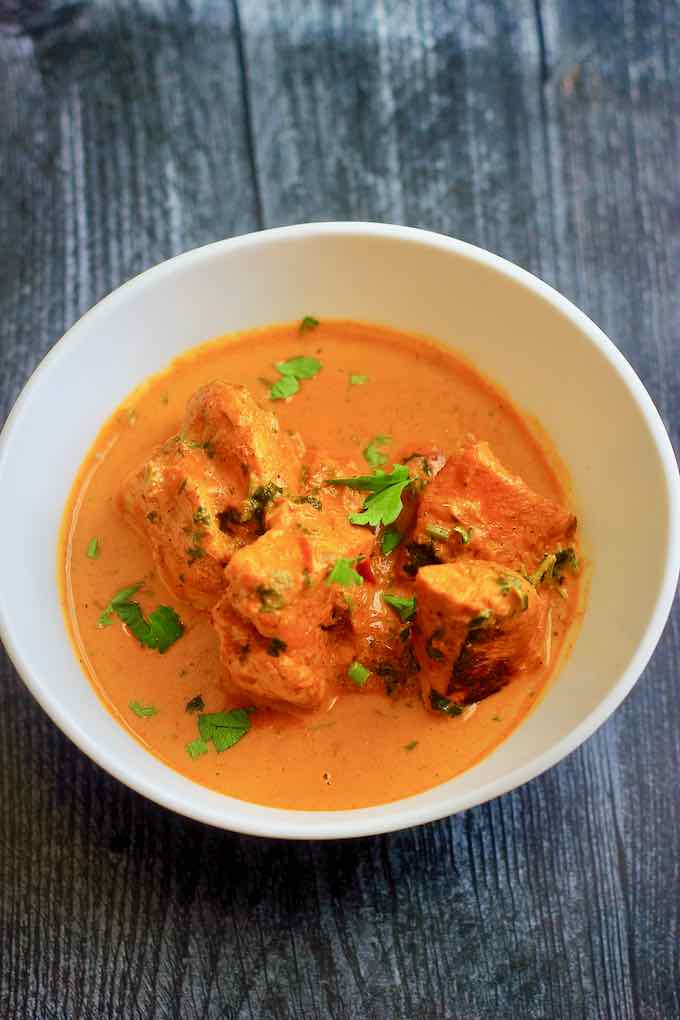 While Indian cuisine is composed of a whole lexicon of dishes from crimson vindaloos to spicy phaals, each masterful in their use of spice and heat, it’s hard to draw away from two favorites seen on nearly every Indian restaurant menu, butter chicken and tikka masala. While both have a familiar smokiness and orange tinge, few can explain the difference between the two.

The main difference between these two mouth-watering dishes is butter chicken has lesser tomato intensity and chicken tikka masala is less creamy than butter chicken.

What spices are used?

Butter chicken calls for a variety of Indian spices, such as turmeric, garam masala, cumin, saffron and coriander. Butter chicken is also one of those Indian dishes that are on the milder side, because of the creaminess created by the yogurt and cream.

Unlike Western dishes where flour or corn starch are used to thicken gravies, cashew paste is used as the thickener for butter chicken and it also creates an additional depth of flavor. 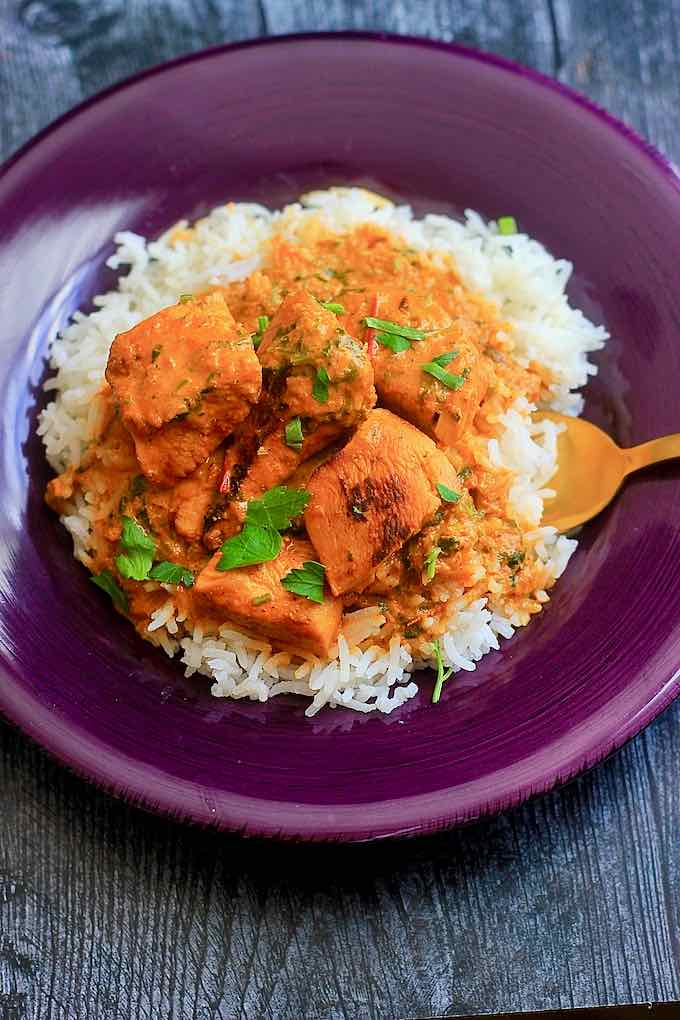 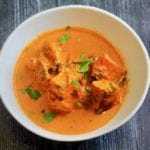 Butter chicken (मुर्ग़ मक्खनी or murgh makhani), is a traditional dish of Indian cuisine in New Delhi, made with chicken marinated in a butter sauce, usually served with naan and rice.

For the chicken and the marinade

* Percent Daily Values are based on a 2000 calorie diet.

Nita is the foodie blogger behind Tastesspicy. Originally from the small Island of Trinidad and Tobago in the Caribbean, she now lives in the cold Tundra of Minnesota, USA where she enjoys sharing recipes from around the world, particularly from the Caribbean featuring foods with a spicy, but flavorful flair.